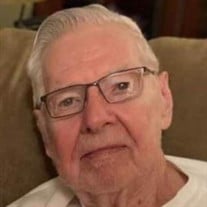 OBITUARY William August Juengel, Sr. of St. Clair, MO departed this life at his home, surrounded by the love of his family, on April 30, 2022, having reached the age of ninety years, five months and sixteen days. William was born in St. Louis, MO on November 14, 1931, son of Charles William Juengel and Louise Lockard Juengel nee Schaefer. On June 8, 1957 he was united in marriage to Sally Ann Benz and three children came to bless this union. William is survived by his son, William August Juengel, Jr., known to all as Bill, and wife, Connie, of Union, MO; by his daughters, Barbara Peters, known to all as Barb, and husband, Ronald, of St. Clair, MO and Susan Lindemann, known to all as Sue, and husband, Steve, of Union, MO; by his sisters-in-law, Chris Lake of Wentzville, MO and Mary Basler and husband, Ron, of St. Louis, MO; by six grandchildren, Sara Juengel of Union, MO, Drew Juengel of St. Louis, MO, Taylor Schaefer and husband, Stephen, of Union, MO, Charlie Peters of St. Clair, MO, Kate Kopmann and husband, Jack, of Union, MO and Josie Lindemann and boyfriend, Adam Molitor, of Union, MO; by his great-grandchildren, Barrett Gratzer and Georgia Schaefer; by nieces, nephews, great and great-great-nieces and nephews, cousins and many friends. William was preceded in death by his parents, Charles and Louise Juengel; by his wife, Sally Juengel; by his brother, Charles Juengel; by his sisters, Martha Phillips and Justine Schwegmann; and by one granddaughter, Stephanie Lindemann. William was a Christian and member of United Methodist Church of St. Clair. He was proud to have served his country in the United States Army during the Korean War, entering on January 24, 1954 and receiving his honorable discharge from active duty on January 24, 1956.Throughout his working career he was a pharmacist and owner of St. Clair Rexall Drug Store. William was very civic minded and a member of many local organizations including Easter Lodge 575 AF & AM, Charter Member and Past President of St. Clair Elks Lodge 2651, American Legion Post 347, St. Clair Lion’s Club, being Lion of the Year in 1980 & 1998 and founding the St. Clair Lion’s Little Angel Program, Chairman of the Salvation Army-St. Clair for ten years, past President of the St. Clair Chamber of Commerce in 1983 & 1984, President of the Juengelwood Golf tournament for twenty-five years, served on the St. Clair School Board of nine years, member of the Board of Directors at Farmers and Merchants Bank and Citizen of the Year in 1984. He was also a member of the Scottish Rite, Moolah Shriners, the National Rifle Association, Korean War Veterans Association and the St. Louis County Narcotics Commission. He had a variety of interests throughout his life including baseball collecting, golfing, classic cars and fishing. He was an avid reader and loved to travel. What meant most to him was time spent with family. The love they shared and the many precious memories they created will be forever cherished by them all. A kind and loving father, father-in-law, grandfather, great-grandfather, brother-in-law, uncle, great and great-great-uncle, cousin and treasured friend, he will be sadly missed and lovingly remembered by all who knew and loved him. Funeral services were held at 7:00 PM Wednesday, May 4, 2022 at Russell Colonial Funeral Home in St. Clair, MO with Tim Nye officiating. Interment with full military honors was in Jefferson Barracks National Cemetery in St. Louis, MO. Memorials may be made to Cardinal Glennon Children’s Hospital or Shriner’s Hospital for Children.

OBITUARY William August Juengel, Sr. of St. Clair, MO departed this life at his home, surrounded by the love of his family, on April 30, 2022, having reached the age of ninety years, five months and sixteen days. William was born in St. Louis,... View Obituary & Service Information

The family of William August Juengel Sr. created this Life Tributes page to make it easy to share your memories.

Send flowers to the Juengel family.