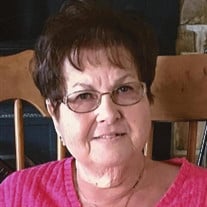 Susan Gae Leach of St. Clair, MO departed this life in St. Louis, MO on August 26, 2021, having reached the age of seventy-four years, eleven months and seventeen days. Susan was born in Sparks, KS on September 9, 1946, daughter of Virgil Frank Smith and Olive Berniece Smith nee Bruns. On January 25, 1969 she was united in marriage to Edgar Frank Leach, known to all as Ed, and two daughters came to bless this union. Susan is survived by her daughters, Amy Hines and partner, Shannon Houston, of Fenton, MO and Robyn Sikes and husband, John, of St. Clair, MO; by two brothers, Bill Smith of Troy, KS and George Smith of St. Joseph, MO; by nine grandchildren, Taylor Sikes and significant other, John Davenport Cortivo II, of St. Clair, Edgar Hines of Hillsboro, MO, Connor Sikes of St. Clair, Melissa Hines of Hillsboro, Tyson Sikes of St. Clair, Alyssa Sikes of St. Clair, Hayley Houston, Lauren Houston and Cody Houston, all of Fenton; by brothers and sisters-in-law, nieces, nephews, great and great-great-nieces and nephews, cousins and many friends. Susan was preceded in death by her parents, Virgil and Berniece Smith; by her husband, Ed Leach; by her uncle and aunt, Cyril & Evelyn Guy; by one brother, Ted Smith; by her sister, Virgie Ann Taylor; by two infant brothers and one infant sister. Susan was a Christian and longtime member of Bethel Baptist Church in Lonedell, MO. She earned an Associate’s Degree from Highland Community College in Highland, KS as well as a Bachelors Degree in Early Education from UMSL, with a minor in Special Education. Susan was a director of a preschool in both St. Charles, MO and Elwood, KS before she became a teacher. She began teaching special education, first in middle school, and then went to teach kindergarten for twenty years. Susan enjoyed going shopping and having breakfast with her friends at Bootheel. She was a sports fanatic, enjoyed watching football and knew all the statistics as well as anyone. She loved going to her grandchildren’s sporting events. She cherished the time she spent with her family. The love they shared and many precious memories they created will forever live on in their hearts. A kind and loving mother, mother-in-law, grandmother, sister, sister-in-law, aunt, great and great-great-aunt, cousin and treasured friend. She will be sadly missed and lovingly remembered by all who knew and loved her. Funeral services were held at 10:00 AM Friday, September 10, 2021 at Russell Colonial Funeral Home in St. Clair, MO with Rev. Ben Kingston officiating. Interment was in Crestview Memorial Park Haven of Rest Mausoleum in St. Clair. Memorials may be made to the family for the purchase of supplies for local teacher’s classrooms.

The family of Susan Gae Leach nee Smith created this Life Tributes page to make it easy to share your memories.