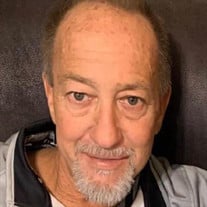 OBITUARY Steven Ramon Gonzalez, Sr. of St. Clair, MO departed this life at his home, on March 14, 2022, having reached the age of fifty-eight years, nine months and thirteen days. Steven was born in St. Louis, MO on June 1, 1963, son of Donald Dale Gonzalez and Ardine Carol Gonzalez nee Gillman. As a young man he was blessed to have five children. On June 27, 2014 he was united in marriage to Nancy Lynnette Bailey and their families were joined as one. Steven is survived by his wife, Nancy Gonzalez of St. Clair, MO; by his children, Steven Gonzalez, Jr. of Arnold, MO, Kyle Gonzalez of St. Louis, MO, Adam Gonzalez and fiancé, Kaitlyn Janssen, of Arnold, MO, Alexa Gonzalez and husband, Haytham Dughaim, of Ballwin, MO and Gabrielle Gonzalez of Arnold, MO; by his step-children, Candyce Hausher and husband, Ronald, of Allen, TX, Meredith Wideman and husband, Erick, of St. Clair, MO and Haylee Pruitt of St. Clair, MO; by his mother, Ardine Miramonti of Arnold, MO; by his step-mother, Judy Gonzalez of St. Charles, MO; by his brothers, Dennis Gonzalez of Hillsboro, MO and Christopher Gonzalez of St. Charles, MO; by two sisters, Laura Gonzalez of St. Charles, MO; and Jennifer Miramonti of Arnold, MO; by his uncle, Jerry Gillman of Imperial, MO; by brothers and sisters-in-law, nieces, nephews, cousins and many friends. Steven was preceded in death by his father, Donald Gonzalez; and by one sister, Sheree Hicklin. Steven was a Christian, having been raised in the Catholic faith and believing in the Lord as his Savior. He was a sheet metal worker by trade and worked primarily through the union hall of Sheet Metal Workers Union Local 36 in St. Louis, MO. He was Chief Fireman and EMT for Lake Timberline Fire Department in Bonne Terre, MO for about ten years. He also volunteered at Bowles Fire Protection District in Labadie, MO and Arnold Fire Department in Arnold, MO. Steven had a variety of interests throughout his life including working on lawn mowers, mowing his lawn and remodeling the house. He loved to go fishing and camping, do crafts and build model cars. Steven loved his pet dogs and loved to tell jokes and tease folks. What meant most to him was time spent with family. The love they shared and many precious memories they created will be cherished by them all forever. A kind and loving husband, father, father-in-law, step-father, son, brother, brother-in-law, nephew, uncle, cousin and treasured friend, he will be sadly missed and lovingly remembered by all who knew and loved him. Funeral services were held at 2:00 PM Friday, March 18, 2022 at Russell Colonial Funeral Home in St. Clair, MO with Father Bob Knight officiating. A private committal will take place at a later date. Memorials may be made to the family.

The family of Steven Ramon Gonzalez Sr. created this Life Tributes page to make it easy to share your memories.

Send flowers to the Gonzalez family.