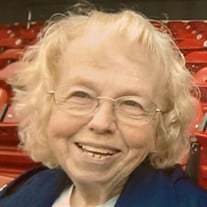 Shirley Dean Giddens, 84, moved to Heaven on Sunday, November 14, 2021 in Washington, Missouri. Shirley was born in Miami, Oklahoma on June 23, 1937 to William Conner and Mary Elizabeth Ellington. She was the youngest of nine children. Shirley graduated from Miami High School in Miami, Oklahoma in 1955. She married Earl Giddens shortly thereafter and traveled abroad as the wife of a member of the U.S. Airforce. Shirley worked at Brown Shoe Factory in Union, Missouri for nearly 25 years after which she attended classes at East Central College. She then went to work for Mid-East Area of Aging until her retirement. Shirley was an active member of the Union Senior Center, serving on various committees and fundraising drives. She was an officer for the Union Optimist Club. Shirley was a devoted fan of the St. Louis Cardinals. She enjoyed gardening and garage sales with her two good friends and neighbors, Theresa Finch and Connie Hufstedler. Shirley’s greatest love was her family and those that she counted as family. She was preceded in death by her partner, Max Pracht of Union, Missouri. She is survived by three children: Cheryn Giddens Oermann and Scott of St. Clair, Ed E. Giddens and Kelly of Willow Park, Texas, and Susan Giddens Lineberry and Harry of Neosho, Missouri; three grandchildren: Danielle Oermann of Afton, Missouri, Madison Giddens of Grapevine, Texas, and Connor Giddens of Fort Worth, Texas; a special nephew: Lee Roberts of Bartlesville, Oklahoma; a bonus family: Michael, Deanna, Mike, and Melissa Wirt of St. Clair; bonus grandchildren: Carla Rogers Ballard, Matt Rogers, Martina Davis, and Amanda Yerkey. Shirley’s family would like to express their deepest gratitude to the amazing nursing staff of Cedarcrest Manor in Washington, Missouri. Shirley certainly loved them all like family as well. Shirley’s final resting place will be the GAR Cemetery in Miami, Oklahoma. Memorials to the Franklin County Humane Society are preferred as Shirley was a great animal lover. The family was served by Russell Colonial Funeral Home, St. Clair.

Shirley Dean Giddens, 84, moved to Heaven on Sunday, November 14, 2021 in Washington, Missouri. Shirley was born in Miami, Oklahoma on June 23, 1937 to William Conner and Mary Elizabeth Ellington. She was the youngest of nine children. Shirley... View Obituary & Service Information

The family of Shirley Dean Giddens nee Ellington created this Life Tributes page to make it easy to share your memories.