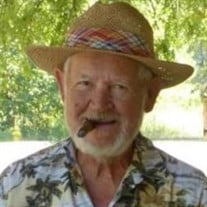 OBITUARY Roger Larry York, known to all as Larry, of St. Clair, MO, departed this life at his home, surrounded by the love of his family, on January 28, 2022, having reached the age of eighty-seven years, seven months and twenty-five days. Larry was born in McLeansboro, IL on June 3, 1934, son of Hale York and Verda York nee Fulford. On December 19, 1959 he was united in marriage to Frieda Victoria Wease and six children came to bless this union. Larry is survived his wife, Frieda York of St. Clair, MO; by four children, Terry York Rudd of St. Clair, MO, Larry York and wife, Ronda, of St. Clair, MO, Kelly Johnson of Villa Ridge, MO and Linda Stokes Baker and husband, Randy, of Orange, TX; by his sisters-in-law, Sharon York of Thompson’s Station, TN and Margaret Boyer of Seattle, WA; by eight grandchildren, seven great-grandchildren, nieces, nephews, great and great-great-nieces and nephews, cousins and many friends. Larry was preceded in death by his parents, Hale and Verda York; by two sons, Richard York and Frank York, known to all as Barry; by his daughter-in-law, Gala York; by his brothers, Charlie York, George York and Lou York; and by his sister, Zulene Payne. Larry was a Christian and believed in the Lord as his Savior. He was proud to have served his country in the United States Navy during the Occupation of Japan. During his working career he was employed by the Franklin County highway department as a foreman. He was a member of Union Moose Lodge #1745 in Union, MO and a past member of St. Clair Elks Lodge #2651, VFW Post #2482 and American Legion Post #347, all in St. Clair. He enjoyed fishing and hunting, especially hunting for mushrooms and arrowheads. Larry and Frieda loved to travel, especially to Texas and Florida, and would frequent flea markets along the way. He also been on a game show, Fun and Fortune. What meant most to him was his time spent with family. The love they shared and many precious memories they created will forever be cherished by them all. A kind and loving husband, father, father-in-law, grandfather, great-grandfather, brother-in-law, uncle, great and great-great-uncle, cousin and treasured friend, he will be sadly missed and lovingly remembered by all who knew and loved him. A private committal will take place at a later date. Memorials may be made to the Alzheimer’s Association. The family was served by Russell Colonial Funeral Home in St. Clair, MO.

OBITUARY Roger Larry York, known to all as Larry, of St. Clair, MO, departed this life at his home, surrounded by the love of his family, on January 28, 2022, having reached the age of eighty-seven years, seven months and twenty-five days.... View Obituary & Service Information

The family of Roger "Larry" York created this Life Tributes page to make it easy to share your memories.

Roger Larry York, known to all as Larry, of St. Clair,...

Send flowers to the York family.