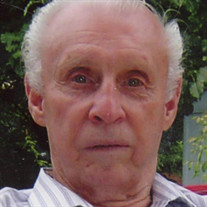 OBITUARY Robert Alphonse Bolte of St. Clair, MO departed this life in St. Clair on February 24, 2022, having reached the age of ninety-one years, nine months and six days. Robert was born in St. Louis, MO on May 18, 1930, son of Alphonse Bolte and Mary Bolte nee Ganey. On October 26, 1996 he was united in marriage to Dorothy Ann Marie Kennedy nee Steinbruegge and he loved her children as his own. Robert is survived by his wife, Dorothy Bolte of St. Clair, MO; by his eight step-children, Patricia Mudd and husband, Edwin, of St. Clair, Kathleen Bouzek and husband, Charles, of Diana, TX, cindy Huff and companion, Bob Nelson, of St. Clair, Gilbert Kennedy and wife, April, of Sullivan, MO, Marcie Sullentrup and husband, Nate, of St. Clair, Craig Kennedy and wife, Carla, of St. Clair, Shawn Kennedy of St. Clair and Keith Kennedy of St. Clair; by his sister, Catherine Bruns and husband, Bernard, of Manchester, MO; by twenty grandchildren, thirty-four great-grandchildren, two great-great-grandchildren, nieces, nephews, great-nieces and nephews, cousins and many friends. Robert was preceded in death by his parents, Alphonse and Mary Bolte; by one step-daughter, Linda Warnebold; and by four grandchildren, Christopher Warnebold, Casey Kennedy, Garrett Kennedy and Kory Kennedy. Robert was a Christian of the Catholic faith and member of St. Clare Catholic Church in St. Clair, MO. He was proud to have served his country in the United States Marine Corps during the Korean War, entering on November 27, 1951 and receiving his honorable discharge on November 11, 1953. During his working career he was employed by Union Electric Company, now known as Ameren-Missouri, as a lineman, retiring after forty years of service to the company. Robert enjoyed doing puzzles and feeding and watching the birds, especially his crows. He also enjoyed working in his yard, cutting his grass and tending his flower beds. What meant most to him was time spent with family, especially playing with and throwing the ball with the grandchildren. The love they shared and many precious memories they created will forever be cherished by them all. A kind and loving husband, step-father, grandfather, great and great-great-grandfather, brother, brother-in-law, uncle, great-uncle, cousin and treasured friend, he will be sadly missed and lovingly remembered by all who knew and loved him. Funeral mass was held at 11:00 AM Monday, February 28, 2022 at St. Clare Catholic Church in St. Clair, MO with Father Eric Kunz officiating. Interment with full military honors was in St. Clare Catholic Cemetery in St. Clair. Memorials may be made to the church. The family of Robert Alphonse Bolte was served by Russell Colonial Funeral Home in St. Clair, MO.

The family of Robert Alphonse Bolte created this Life Tributes page to make it easy to share your memories.

Send flowers to the Bolte family.