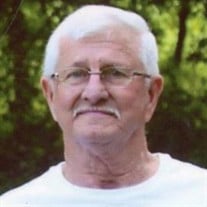 OBITUARY Richard Eugene Stearns of Lonedell, MO departed this life at his home, surrounded by the love of his family, on March 29, 2022, having reached the age of seventy-eight years and twenty-three days. Richard was born in Daisy, MO on March 6, 1944, son of Ova Ray Stearns and Nellie Ethel Stearns nee Hobeck. On December 7, 1962, he was united in marriage to Brenda Irene Clippard, and three children came to bless this union. Richard is survived by his wife, Brenda Stearns of Lonedell, MO; by his son, Tim Stearns and wife, Pam, of Jackson, MO; by his daughters, Crystal Breitenstein and husband, Kevin, of Lonedell and Kelly Dierker and husband, Brian, of Lonedell; by four sisters, Carma “Peg” Newell and husband, Charles, of Jackson, Linda Morton and husband, Jerry, of Jackson, Mary James of Patton, MO and Patsy Wendel of Jackson; by seven grandchildren, seven great-grandchildren, brothers and sisters-in-law, nieces, nephews, great-nieces and nephews, cousins and many friends. Richard was preceded in death by his parents, Ova and Nellie Stearns; by his brothers, Virgil Stearns, Fred Stearns and Bob Stearns, and by sisters, Earlene Langston, and Verla “Sue” Clippard. Richard was a Christian and member of Church of Christ in St. Clair, MO; During his working career he was employed by Daimler-Chrysler Corporation in Fenton, MO serving the company for twenty-eight years before retiring. He was a proud member of both United Auto Workers Locals. Richard was a past member of Lonedell R-14 School Board, coached his son’s baseball teams and daughter’s softball teams and volunteered for St. Clair Fire Protection District in Lonedell, MO. He had a variety of interests throughout his life in woodworking, fishing, and camping. He also enjoyed working jigsaw puzzles and watching western movies on television. What meant most to him was time spent with his family, especially his grandchildren. The love they shared and many precious memories they created together will be cherished by them all forever. A kind and loving husband, father, father-in-law, grandfather, great-grandfather, brother, brother-in-law, uncle, great-uncle, cousin, and treasured friend, he will be sadly missed and lovingly remembered by all who knew and loved him. Funeral services were held at 10:00 AM Monday, April 4, 2022, at Russell Colonial Funeral Home in St. Clair, MO with Pastor John Westerman officiating. Interment was in Crestview Memorial Park in St. Clair, MO. Memorials may be made to Lonedell R-14 Scholarship Fund.

OBITUARY Richard Eugene Stearns of Lonedell, MO departed this life at his home, surrounded by the love of his family, on March 29, 2022, having reached the age of seventy-eight years and twenty-three days. Richard was born in Daisy, MO on... View Obituary & Service Information

The family of Richard Eugene Stearns created this Life Tributes page to make it easy to share your memories.

Send flowers to the Stearns family.