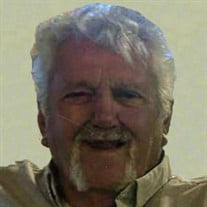 Rex Leroy Bell of Cuba, MO departed this life in Washington, MO on September 28, 2021, having reached the age of seventy-eight years, eight months and twenty-five days. Rex was born in Granite City, IL on January 3, 1943, son of Leroy Nelson Bell and Audrey Edna Bell nee Kelley. As a young man he was united in marriage and blessed to have two sons. About ten years ago he began sharing his life with his girlfriend, Anna Morgan. Rex is survived by his girlfriend, Anna Morgan, of Cuba, MO; by his sons, Jed Bell and wife, Kathy, of St. Clair, MO and Chad Bell of Summersville, MO; by several grandchildren and great-grandchildren; by nieces, nephews, great and great-great-nieces and nephews, cousins and many friends. Rex was preceded in death by his parents, Leroy and Audrey Bell; and by his sister, Audrey Jean Manning. Rex was a Christian, having been raised in the Baptist faith as a young boy and believing in the Lord as his Savior. During his working career he drove a semi-truck for some time but was primarily a salesman and trader of horses and cars. The thrill of the trade was in his blood, and he started his passion in grade school trading out of his lunch box. He loved to collect things, go to yard sales and go antiquing. He had an amazing memory, able to recall various trades, names of people and prices. He also loved to pull ponies. What meant most to him was time spent with family. He was a proud grandpa to his grandchildren and great-grandchildren. The love they shared and many precious memories they created will be cherished by them forever. A kind and loving companion, father, father-in-law, grandfather, great-grandfather, uncle, great and great-great-uncle, cousin and treasured friend, he will be sadly missed and lovingly remembered by all who knew and loved him. Funeral services were held at 2:00 PM Sunday, October 3, 2021 at Russell Colonial Funeral Home in St. Clair, MO with Richard Helton officiating. Interment was in Midlawn Memorial Gardens in Union, MO. Memorials may be made to the charity of choice.

The family of Rex Leroy Bell created this Life Tributes page to make it easy to share your memories.

Send flowers to the Bell family.