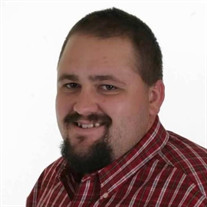 OBITUARY Phillip John Black of Sullivan, MO departed this life in Chesterfield, MO on January 21, 2022, having reached the age of forty-two years, one month and eighteen days. Phillip was born in St. Louis, MO on December 3, 1979, son of Lester Carl Black and Debbie Ann Black nee Feltrop. On March 19, 2005 he was united in marriage to Stacy Marie Pyatt and two children came to bless this union. Phillip is survived by his wife, Stacy Black of Sullivan, MO; by his children, Trent Lee Black and Trevor John Black, both of Sullivan; by his dad, Lester Black and fiancé, Marilyn McDonald, of St. Clair, MO; by his brothers, Carl Black and wife, Kristen, of St. Clair and Daniel Black and wife, Gretchen, of Sullivan; by his grandparents, Glenn and Edna Curtner of Arnold, MO; by his parents-in-law, Rick and Rose Pyatt of Beaufort, MO; by his sister-in-law, Treina Bankhead and husband, Matt, of Marthasville, MO; by his nephews, Cole Black of St. Clair, Levi Bankhead of Marthasville, Chase Black of Sullivan, Eli Bankhead of Marthasville and Jordan Black of Sullivan; by his niece, Ruby Bankhead of Marthasville; by aunts, uncles, cousins, other relatives and many friends. Phillip was preceded in death by his mother, Debbie Black and by his grandparents, Ralph Black and Gladys Shelton. Phillip was a Christian and had been attending Life Stream Church in Washington, MO. During his working career he was employed at Walker Products where he was a mechanic and helped with overall maintenance. Phillip took pride in working on cars and helping anyone when he had the chance. He also enjoyed his time outdoors camping, riding boats and listing to country music. Football was one of his favorite pastimes, especially watching the Kansas City Chiefs. Phillip also enjoyed his daily routine of stopping by McDonalds. Nothing was more important to him than spending time with family and friends. His children were his pride and joy and the many precious memories they created will forever be cherished by them all. A kind and loving husband, father, son, brother, grandson, son-in-law, brother-in-law, uncle, nephew, cousin and treasured friend, he will be sadly missed and lovingly remembered by all who knew and loved him. Funeral services were held at 11:00 AM Wednesday, January 26, 2022 at Russell Colonial Funeral Home in St. Clair, MO with Pastor Paul Scheperle officiating. Interment was in Crestview Memorial Park in St. Clair. Memorials may be made to the family for the boy’s education.

OBITUARY Phillip John Black of Sullivan, MO departed this life in Chesterfield, MO on January 21, 2022, having reached the age of forty-two years, one month and eighteen days. Phillip was born in St. Louis, MO on December 3, 1979, son of Lester... View Obituary & Service Information

The family of Phillip John Black created this Life Tributes page to make it easy to share your memories.

Send flowers to the Black family.