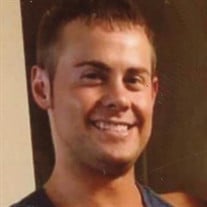 OBITUARY Michael Conway Powers, Jr. of Bourbon, MO departed this life in Bourbon on April 14, 2022, having reached the age of thirty-three years, ten months and eighteen days. Michael was born in St. Louis, MO on May 27, 1988, son of Michael Conway Powers, Sr. and Denise Lynn Powers nee Friend. Michael is survived by his daughter, Emma Mae Powers of Bourbon, MO; by his parents, Michael, Sr. and Denise Powers of St. Clair, MO; by his grandparents, Harold Friend and wife, Joan, of Luebbering, MO and Lewis and Dorcas Powers of St. Louis, MO; by his sister, Mindy Gonzalez and husband, Alex, of Jacksonville, FL; by Emma’s mother, Josie McManus of Bourbon, MO; by aunts, uncles, great-aunts and uncles, cousins and many friends. Michael was preceded in death by his grandmother, Marlene Friend. Michael was a Christian and had previously attended both Bethel Baptist Church in Lonedell, MO and The Ridge in Villa Ridge, MO. During his working career he was employed by Frick’s in Union, MO in the meat department as a butcher. He had a variety of interests throughout his life including body building and had competed in body building competitions. Michael also loved to watching Dragon Ball Z on television. What meant most to him was time spent with his family, especially his daughter Emma. She was his pride and joy and he cherished the time spent with her. A kind and loving father, son, grandson, brother, brother-in-law, nephew, great-nephew, cousin and treasured friend, he will be sadly missed and lovingly remembered by all who knew and loved him. Funeral services were held at 10:00 AM Friday, April 22, 2022 at Russell Colonial Funeral Home in St. Clair, MO with Rev. Ben Kingston officiating. Interment was in Luebbering Citizens Community Cemetery in Grubville, MO. Memorials may be made to Emma c/o Michael, Sr. and Denise Powers.

OBITUARY Michael Conway Powers, Jr. of Bourbon, MO departed this life in Bourbon on April 14, 2022, having reached the age of thirty-three years, ten months and eighteen days. Michael was born in St. Louis, MO on May 27, 1988, son of Michael... View Obituary & Service Information

The family of Michael Conway Powers Jr. created this Life Tributes page to make it easy to share your memories.

Send flowers to the Powers family.