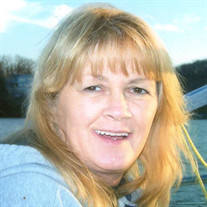 OBITUARY Melanie Jo Kennedy, known to all as Jody, of Sullivan, MO departed this life in Sullivan on February 26, 2022, having reached the age of sixty-three years, five months and twenty-nine days. Jody was born in St. Louis, MO on August 28, 1958, daughter of Kenneth Wayne Lewis and Zoe Yvonne Lewis nee King. As a young woman she was united in marriage and blessed to have two daughters. Jody is survived by her daughters, Megan Smith and significant other, Ken Long, of St. Clair, MO and Michelle Smith and significant other, Jordan Medley, of Lebanon, MO; by her grandchildren, Matthew Hunt and Marcus Hunt, both of St. Clair; by her brothers, Jeff Lewis of St. Clair, Jay Lewis and wife, Robbin, of Hermann, MO, Michael Lewis, known to all as Pete, and wife, Terri, of Sullivan, MO and Kenny Vawter of House Springs, MO; by one sister, Lori Shepherd, known to all as Sis, and husband, Scott, of St. Louis, MO; by nieces, nephews, great-nieces and nephews, cousins and many friends. Jody was preceded in death by her father, Kenneth Lewis; by her mother, Zoe Reed; by her step-father, Phillip Reed; and by one sister, Jamie Sue Lewis. Jody was a Christian, having been raised in the Baptist faith and believing in the Lord as her Savior. She attended East Central College in Union, MO, studying to be an Administrative Assistant and was employed as an Office Administrator for various companies over the years. Jody was a past member of Elk’s Ladies Auxiliary. She was an avid St. Louis Cardinal baseball fan, loved to go boating at Lake of the Ozarks and watch drag races. She also loved going fishing and running trotlines. Later in her life she was primarily a stay-at-home grandma. Her grandchildren and nieces and nephews held a very special place in her heart, as she did in theirs. The love they shared and many precious memories they created will be cherished by them all forever. A kind and loving mother, grandmother, sister, sister-in-law, aunt, great-aunt, cousin and treasured friend, she will be sadly missed and lovingly remembered by all who knew and loved her. Memorial visitation was held from 3:30 to 6:00 PM Friday, March 4, 2022 at Russell Colonial Funeral Home in St. Clair, MO. A private committal will take place at a later date. Memorials may be made to Grace’s Place Crisis Nursery in Washington, MO or HALO (Home at Last Organization) in Sullivan, MO.

OBITUARY Melanie Jo Kennedy, known to all as Jody, of Sullivan, MO departed this life in Sullivan on February 26, 2022, having reached the age of sixty-three years, five months and twenty-nine days. Jody was born in St. Louis, MO on August... View Obituary & Service Information

The family of Melanie Jo "Jody" Kennedy created this Life Tributes page to make it easy to share your memories.

Melanie Jo Kennedy, known to all as Jody, of Sullivan,...

Send flowers to the Kennedy family.