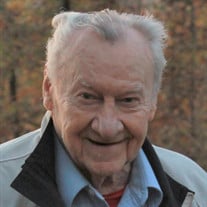 Max Lee McCall of St. Clair, MO departed this life at his home on September 10, 2021, having reached the age of eighty-seven years, seven months and twenty-four days. Max was born in Wetmore, KS on January 17, 1934, son of Glyn T. McCall and Elsie may McCall nee Linn. As a young man he was united in marriage and blessed to have one daughter. Max is survived by four grandchildren, Andrew McCall of St. Clair, MO, Addison McCall of Jacksonville, NC, Jacob King and wife, Brittany, of St. Clair and Colten King and girlfriend, Elisabeth McCurdy, of St. Clair; by two great-grandchildren, Cameron King and Emmalee King; by nieces, nephews, great and great-great-nieces and nephews, cousins, other relatives and many friends. Max was preceded in death by his parents, Glyn and Elsie McCall; by his daughter, Nichole Leigh McCall, known to all as Nicky; by his brother, Keith McCall; and by his sister, Glynda Noe. Max was a Christian, being raised in the Methodist faith and believing in the Lord as his Savior. He was proud to have served his country as a tank mechanic in the United States Army during the Korean War. After his discharge he moved to Omaha, NE where he worked as a mechanic. In 1969 he moved to St. Clair, MO and started working for Tom Ritter and retired after thirty-four years. He had at one time owned and built his own race car. Max loved playing cards, especially solitaire, and going fishing. He also loved watching baseball and was a huge St. Louis Cardinals fan. He was a proud Republican and supporter of Donald Trump and was also considered a Grandpa to many. His family held a very special place in his heart, as he did in theirs. The love they shared and many precious memories they created will live on in their hearts forever. A kind and loving grandfather, great-grandfather, uncle, great and great-great-uncle cousin and treasured friend, he will be sadly missed and lovingly remembered by all who knew and loved him. Memorial services with military honors were held at 5:00 PM Thursday, September 16, 2021 at Russell Colonial Funeral Home in St. Clair, MO with Rev. Fern Nye officiating. A private committal will take place at a later date. Memorials may be made to the family for Donald Trump’s campaign.

Max Lee McCall of St. Clair, MO departed this life at his home on September 10, 2021, having reached the age of eighty-seven years, seven months and twenty-four days. Max was born in Wetmore, KS on January 17, 1934, son of Glyn T. McCall and... View Obituary & Service Information

The family of Max Lee McCall created this Life Tributes page to make it easy to share your memories.

Max Lee McCall of St. Clair, MO departed this life at his home...

Send flowers to the McCall family.