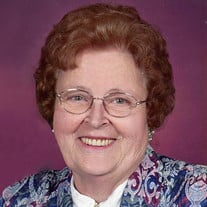 Marilyn Viehland (nee Weber) July 25, 1931 - March 22, 2022 Marilyn Bertha Emily Viehland of Union, Missouri was born on July 25, 1931 in St. Louis, Missouri, daughter of William J. Weber and Ella J. Weber (nee Bruns). Marilyn departed this life on March 22, 2022 in Washington, Missouri. After 90 years, 7 months and 26 days, her loving heart was tired. Marilyn was united in marriage to Howard Viehland on August 26, 1950, and this marriage was blessed with four children. On November 21, 1981, she was united in marriage to Warren Viehland. Marilyn is survived by four children – Dennis Viehland (Judith Hoek) of Lake Tekapo, New Zealand, Douglas Viehland (Beth) of Overland Park, Kansas, Elaine Gilligan (Jim) of Independence, Missouri and Gail Haynes (Kevin) of Eureka, Missouri. She was the proud grandmother of seven grandchildren – Mark, Kevin, Kati, Daniel, John, Kristin and Bryan and four great grandchildren – Audrey, Emerson, Landon and Reagan. She is also survived by her brother, William Neal Weber (Jane). She was blessed with being called “Aunt Marilyn” by many nieces, nephews, grands and greats, some of whom were like her own grandchildren. She is also survived by many other relatives and friends. Marilyn is preceded in death by her parents, her husband Warren, her sister Carol Jean Kramme and her first husband Howard. Marilyn was baptized, confirmed and a lifelong member of St. Martin’s United Church of Christ in Dittmer, Missouri. She and Warren also attended Zion United Church of Christ in Union, Missouri. Marilyn graduated from St. Clair High School in 1950 as valedictorian of her graduating class. For a short period of time, she worked in a secretarial role at Wallace Pencil Company in St. Louis. She left work to raise her family, mastering the “farm-to-table” life before it was a thing. She worked at the Franklin County Collector’s office and many years at the Assessor’s office. She clerked at the AD Auction Barn in her retirement years. Marilyn was a life-long Republican, never missing an election until age made it difficult to get to the polls. She worked over 50 years as a Republican election judge and served several years as a Republican Committee Woman. In her leisure time, Marilyn enjoyed crafts and traveling. Marilyn and Warren were blessed with visiting every state, many countries and every continent including Antarctica. Marilyn will be interred in the St. Martin’s Cemetery, which was very important to her as she assisted with a detailed mapping of the cemetery. She was the family historian – tracking the genealogies of the Weber and Viehland families without the assistance of the Internet. Visitation will be at Russell Colonial Funeral Home in St. Clair Missouri on Friday, April 1, 2022, 4:00 PM-8:00 PM. On Saturday, April 2, 2022, St. Martin’s United Church of Christ, Dittmer will host a visitation at 10:00 AM followed by the funeral service at 11:00 AM with internment in the church cemetery. A light lunch will follow. In lieu of flowers, memorial gifts are suggested to the St. Martin’s UCC Cemetery Fund, 7890 Dittmer Ridge Road, Dittmer, MO 63023.

The family of Marilyn Bertha Emily Viehland nee Weber created this Life Tributes page to make it easy to share your memories.