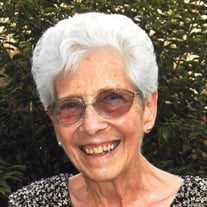 Mahala Mae Manion Girardier nee Ringeling, known to those who knew her as Fritz, was born on December 30, 1932 in Cuba, MO to Benjamin Dowler Ringeling and Velma Hemker Ringeling. She was united in marriage to Kenneth Manion on December 10, 1948 and they were blessed with four children. Fritz was widowed in 1960 and married Lawrence Girardier on November 9, 1963 and they were blessed with one child. Those Fritz leaves behind include her children: Ray Manion (Denise) of New Mexico, Dale Manion (Karen) of Georgia, Cheryl Manion Winiger of St. Clair; Roberta Manion Yoffie (Joe) of St. Louis and Elizabeth Girardier Gotway (Jerry) of St. Clair; one brother FJ Ringeling (Maxine) of Rhode Island; fourteen grandchildren...Kenny, Eric, Jeremy, Jennifer, Lyann, Kevin, Courtney, Kelsey, James, Mark, Ellen, Phillip, Austin and Wyatt, seventeen great grandchildren with one on the way and many nieces, nephews and cousins. Fritz joins family that has gone before her including her parents, both husbands, sister Adelphia Bancroft, brother Bd Ringeling, son-in-law Jerry Winiger and grandson Andrew Manion. Fritz was many things throughout her life...a wife, a mother, a daughter, a sister, a grandma, an aunt, a friend, a nurse, a mentor...but the one that she was the most passionate about was being a Christian. She knew many heartaches and trials in life, but her anthem in life was Victory in Jesus. She always leaned on her faith and trusted God to get her through. And, she was a mother who loved her children and her family unconditionally, always told it like it was, but you knew that she would always be there in your corner no matter what. Fritz started nursing school in 1969, becoming an LPN and working at St. Johns Mercy Hospital in Washington, Mo for 27 years. She worked in Labor and Delivery and was passionate about caring for mothers after they delivered their babies. Toward the end of her career, she worked in the nursery caring for the newborns. After retirement, she volunteered at the Pregnancy Assist Center in Washington, MO. She also babysat after retirement and each of those kids became her honorary grandchildren. She was active in her church, from helping with dinners, events and starting up a library...she was involved in everything and loved her church family deeply. Attending church was important to her and one of the things that she missed the most when it became hard for her to get out. When she left this world on November 19, 2021, surrounded by her family, there was much grief and many tears shed, but we know there was much rejoicing as the angels must have been singing her favorite hymn...Victory in Jesus...and all of heaven welcomed her with open arms to the place she had been so looking forward to going.

Mahala Mae Manion Girardier nee Ringeling, known to those who knew her as Fritz, was born on December 30, 1932 in Cuba, MO to Benjamin Dowler Ringeling and Velma Hemker Ringeling. She was united in marriage to Kenneth Manion on December 10,... View Obituary & Service Information

The family of Mahala "Fritz" Mae Girardier nee Ringeling created this Life Tributes page to make it easy to share your memories.

Mahala Mae Manion Girardier nee Ringeling, known to those who...