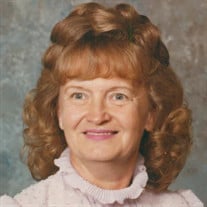 OBITUARY Leona Mae Robinson, known to most as Midge, of Phoenix, AZ, formerly of St. Clair, MO, departed this life in Phoenix on February 26, 2022, having reached the age of eighty-six years, four months and twenty-nine days. Midge was born in St. Clair on September 28, 1935, daughter of Robert Busse and Florence Belle Busse nee Dazey. On August 26, 1951 she was united in marriage to Paul Richard Robinson, Jr., known to all as Richard, and two sons came to bless this union. Midge is survived by her husband, Richard Robinson, Jr. of Phoenix, AZ; by her sons, Richard Lee Robinson and wife, Carol, of Las Vegas, NV and Dennis Robinson and wife, Amy, of Las Vegas; by one sister, Helen Mullis and husband, Fred, of Beaufort, MO; by her sisters-in-law, Joanne Busse of St. Clair and Helen Busse of St. Clair; by her grandchildren, Marion Hazelwood of Lake Oswego, OR, Richard Robert Robinson and wife, Emily, of Las Vegas, Michael Robinson and wife, Marie, of Ketchikan, AK and Zachary Robinson of Las Vegas; by her great-grandchildren, Robin Todd of Lake Oswego, Moss Schlosser of Lake Oswego and Richard Joseph Robinson, known to all as Ricky, of Las Vegas; by nieces, nephews, great-nieces and nephews, cousins and many friends. Midge was preceded in death by her parents Robert and Florence Busse; by one sister, Eleanor Peraza; and by her brothers, Robert, known to all as Hoke, Albert, Thomas, Harry, Irvin, Richard, known to all as Dick, and Kenneth Busse. Midge was a Christian, having been raised in the Baptist faith as a member of Chapel Hill Baptist Church and believing in Jesus Christ as her Lord and Savior. She worked for Valley National Bank of Arizona for 18 years, starting as a file clerk and retiring as an assistant bank branch manager. Midge was a really good cook who loved to feed her family and friends. Some of the food she enjoyed sharing with her neighbors was banana bread, soup and pasta. She had several favorite activities including fishing, dancing, traveling, camping, reading, and lawn and garden work. By far, the most important thing to her was family starting with a 70 ½ year marriage to her husband, raising her sons, and spending as much time as possible with her grandchildren and great grandchildren. More than anything she wanted her immediate and extended family to do well and be happy from having harmonious relationships full of love, passion and respect. One of her most endearing attributes was her heartfelt love of family, friends and neighbors often resulting in quietly helping people when they were down on their luck or emotionally discouraged. A kind and loving wife, mother, mother-in-law, grandmother, great-grandmother, sister, sister-in-law, aunt, great-aunt, cousin and treasured friend, she will be sadly missed and lovingly remembered by all who knew and loved her. Funeral services will be held at 10:00 AM Saturday, March 26, 2022 at Russell Colonial Funeral Home in St. Clair, MO with Rev. Dick Hinson officiating. Interment will be in Anaconda Community Cemetery in St. Clair. Memorials may be made to St. Jude Children’s Research Hospital.

OBITUARY Leona Mae Robinson, known to most as Midge, of Phoenix, AZ, formerly of St. Clair, MO, departed this life in Phoenix on February 26, 2022, having reached the age of eighty-six years, four months and twenty-nine days. Midge was born... View Obituary & Service Information

The family of Leona Mae "Midge" Robinson nee Busse created this Life Tributes page to make it easy to share your memories.

Leona Mae Robinson, known to most as Midge, of Phoenix,...