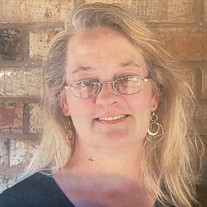 OBITUARY Leasa Dorothea Hope Strader Capehart nee Crum of St. Clair, MO departed this life at her home on March 18, 2022, having reached the age of sixty years, seven month and eighteen days. Leasa was born on July 29, 1961, daughter of Howard L. Crum and Vicki L. Crum nee Mercer. As a young woman she was united in marriage and blessed to have four children. On January 7, 2017 she was united in marriage to Wayne Charles Capehart. Leasa is survived by her husband, Wayne Capehart of St. Clair, MO; by her children, Sara Smith and husband, Gary, of Gerald, MO, Haley Siebert and husband, Thomas, of Lebanon, MO, Hannah Strader of Olympia, WA and John Strader, III of Bourbon, MO; by seven grandchildren, Wyatt, Ezekiel and Swoosie Sherman, Reese, Korbin, Eden and Willow Siebert; by her brother, Charley Haverstick and wife, Judy, of Ramah, NM; by three sisters, Suarra Baker of Honolulu, HI, Joy Ragsdale and husband, Keith, of St. Clair, MO and Karen Klemme and husband, Mike, of Bluffton, SC; by nieces, nephews, great-nieces and nephews, cousins and many friends. Leasa was preceded in death by her parents, Howard and Vicki Crum; by her former husband, John Strader, Jr.; and by her brother, Howard Crum. Leasa was a Christian, having been raised in the Pentecostal faith and believing in the Lord as her Savior. During her working career she was employed by Platt’s Nursery, Wal-Mart and Margos Florist all in Union, MO. Leasa had a passion for horticulture and enjoyed taking care of her plants and doing landscaping projects. She also liked doing crafts, making junk journals and listing to music. Leasa loved being outside and especially going to the beach when she had the chance. What meant most to her was time spent with family. Her children and grandchildren held a very special place in her heart, as she did in theirs. The love they shared and many precious memories they created together will be cherished by them all forever. A kind and loving wife, mother, mother-in-law, grandmother, sister, aunt, great-aunt, cousin and treasured friend, she will be sadly missed and lovingly remembered by all who knew and loved her. Funeral services were held at 10:00 AM Tuesday, March 22, 2022 at Russell Colonial Funeral Home in St. Clair, MO with Michael Sawyer officiating. Interment was in Bethel Baptist Cemetery, Lonedell, MO. Memorials may be made to Franklin County Drug/DWI Court, Homeless fund. Our family will never forget, Kenajo Bell and Robert Fregalette. Thank you and may God bless you.

The family of Leasa Dorothea Hope Strader Capehart nee Crum created this Life Tributes page to make it easy to share your memories.