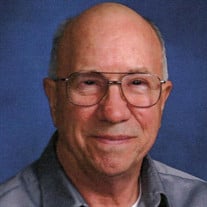 OBITUARY Larry Olis McHugh, known to most as Sarge, of St. Clair, MO departed this life at his home, surrounded by the love of his family, on January 25, 2022, having reached the age of eighty-one years, one month and seven days. Larry was born in Wardell, MO on December 18, 1940, son of Olis Henry McHugh and Lawanda Maude McHugh nee Johnson. On March 31, 1967 he was united in marriage to Patricia Agnes Overschmidt . Larry is survived by his wife, Patty McHugh of St. Clair, MO; by one brother, Gaylon McHugh of Edwardsville, IL; by two sisters, Camilla McHugh and life partner, Diane Hasenstaub, of Kirkwood, MO and Donna McHugh of Wildwood, MO; by three sisters-in-law, Helen Albrecht of Ballwin, MO, Judi Harper and husband, Gary, of Drummonds, TN and Karen Overschmidt and fiancée, John Norris of St. Peters, MO; by one brother-in-law, Gordian Grus of St. Clair, MO; by nieces, nephews, great and great-great-nieces and nephews, cousins and many friends. Larry was preceded in death by his parents, Olis and Lawanda McHugh; by one brother, Bill McHugh; by one sister, Glenda Thompson; by two sisters-in-law, Barbara Grus and Barbara McHugh; and by two brothers-in-law, Walter Overschmidt and George Albrecht. Larry was a Christian, having been raised in the Baptist faith and believing in the Lord as his Savior. He was proud to have served in the United States Army during the Vietnam War, having attained the rank of SP4 and receiving his honorable discharge on January 14, 1966. During his working career he was employed by the Boeing Corporation in St. Louis, MO as a Tool & Parts Control Specialist for ten years and also as a Deputy for the Franklin County Sheriff’s Department for twenty-three years. Larry was a member of American Legion Post # 347 and VFW Post #2482, both in St. Clair, MO and Cedar Hill Elks Lodge #2678 in Cedar Hill, MO. He had a variety of interests throughout his life including riding motorcycles, owning seventeen of them over the years, traveling across the country and riding with friends. He also loved military aircraft and flew helicopters in Vietnam. Larry enjoyed fishing and had a love for animals and cars. He enjoyed time spent with family and friends and the many precious memories they created will forever be cherished by them all. A kind and loving husband, brother, brother-in-law, uncle, great and great-great-uncle, cousin and treasured friend, he will be sadly missed and lovingly remembered by those who knew and loved him. A private committal with full military honors will take place at a later date at Jefferson Barracks National Cemetery in St. Louis, MO. The family would like to extend special thanks to the St. Clair Ambulance District for their assistance and to the St. Clair Police Department, Franklin County Sherriff’s Department and Russell Colonial Funeral Home for their escort and service.

OBITUARY Larry Olis McHugh, known to most as Sarge, of St. Clair, MO departed this life at his home, surrounded by the love of his family, on January 25, 2022, having reached the age of eighty-one years, one month and seven days. Larry was... View Obituary & Service Information

The family of Larry Olis McHugh created this Life Tributes page to make it easy to share your memories.

Larry Olis McHugh, known to most as Sarge, of St....

Send flowers to the McHugh family.