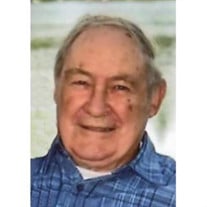 Jerry Floyd Landwehr of Sullivan, MO departed this life in Sullivan on October 18, 2021, having reached the age of eighty-four years, nine months and thirteen days. Jerry was born in Strain, MO on January 5, 1937, son of Floyd Julius Landwehr and Alean Olga Landwehr nee Cowan. As a young man he was blessed to have two daughters. On July 29, 1977 he was united in marriage to Shirley Jean Day and their families were joined as one. Jerry is survived by his wife, Shirley Landwehr of Sullivan, MO; by his daughters, Joy Wilken and husband, Ronnie, of St. Clair, MO and Cheryl Burris and significant other, Michael Demmer, of Corfu, NY; by his step-daughter, Regina VanHuss of Bourbon, MO; by two brothers, DeWayne Landwehr and wife, Gail, of Anderson, IN and David Landwehr and wife, Christy, of Nixa, MO; by one sister, Jane Tummons and husband, Mike, of Rolla, MO; by five grandchildren, Eric Wilken of Springfield, MO, Dairedee Burris and boyfriend, Josh Bennett, of the state of WY, Johnathan Burris and girlfriend, Lauren Hunt, of Erie, KS, Alanis Stine of Erie, KS and Andrea Cox and husband, Elijah, of Bourbon, MO; by seven great-grandchildren, brothers and sisters-in-law, nieces, nephews, great and great-great-nieces and nephews, cousins, other relatives and many friends. Jerry was preceded in death by his parents, Floyd and Alean Landwehr; by one brother, Donald Landwehr; and by two sisters, Maxine Schuler and Janet Rosson. Jerry was a Christian and had been attending the 1st Assembly of God Church in Sullivan, MO; During his working career he owned and operated Jerry’s Quality Woodworks in St. Clair, MO for over twenty-eight years. He enjoyed woodworking, going fishing and farming. He raised pheasants, chickens and cattle on the family farm. He loved riding his Canam motorcycle and traveling, especially to all the parks in Utah, the Smoky Mountains and in Arkansas. His children and grandchildren were his pride and joy and he cherished the time spent with them. The love they shared and many precious memories they created will be held dear in their hearts forever. A kind and loving husband, father, step-father, grandfather, great-grandfather, brother, brother-in-law, uncle, great and great-great-uncle, cousin and treasured friend, he will be sadly missed and lovingly remembered by all who knew and loved him. Funeral services were held at 10:00 AM Tuesday, October 26, 2021 at Russell Colonial Funeral Home in St. Clair, MO with Rev. Kyle Phillips officiating. Interment was in Champion City Methodist Cemetery in Champion City, MO. Memorials may be made to the Alzheimer’s Association.

The family of Jerry Floyd Landwehr created this Life Tributes page to make it easy to share your memories.

Send flowers to the Landwehr family.