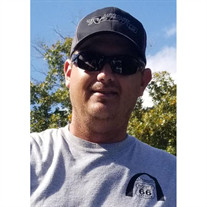 Jeremy Edward Burton of Lonedell, MO departed this life in St. Louis, MO on October 20, 2021, having reached the age of forty years, six months and eighteen days. Jeremy was born in Washington, MO on April 2, 1981, son of Edward Clarence Burton, II, known to all as Ed, and Linda Jo Burton nee Huffhines. On September 20, 2003 he was united in marriage to Tiffany Nicole Blanton and two children came to bless this union. Jeremy is survived by his wife, Tiffany Burton of Lonedell, MO; by his children, Cohen Burton and Daylyn Burton, both of Lonedell; by his parents, Ed, II and Linda Burton of St. Clair, MO; by his brother, Jason Burton and wife, Shelby, of Thousand Oaks, CA; by his grandparents, Ed, Sr. and Virginia Burton, of St. Clair, MO; by his parents-in-law, Mark and Kim Blanton; by his nephew, Alex Burton of Rolla, MO; by aunts, uncles, cousins, other relatives and many friends. Jeremy was preceded in death by his grandparents, Bud and Pat Huffhines. Jeremy was a Christian, having been raised in the Baptist faith and had been attending New Hope Baptist Church in Sullivan, MO. During his working career he was owner and operator of St. Clair Auto Body in St. Clair, MO for the past six years, as well as part owner of Franklin County Fire Extinguisher for the last year and a half. He was also a proud member of Iron Workers Local 396 in St. Louis, MO. Jeremy was a member of St. Clair Elks Lodge 2651 in St. Clair, President of the Route 66 Car Club and a member of the Meramec Mafia Boating Club. He loved doing custom paint jobs on boats. He also enjoyed going spending time with friends, fishing, boating and hunting. Nothing was more important to him than spending time with family. His children were his pride and joy and the many precious memories they created will forever be cherished by them all. A kind and loving husband, father, son, son-in-law, grandson, uncle, nephew, cousin and treasured friend, he will be sadly missed and lovingly remembered by all who knew and loved him. Funeral services were held at 10:00 AM Friday, October 29, 2021 at Russell Colonial Funeral Home in St. Clair, MO with Pastor John Pursley officiating. Interment was in Crestview Memorial Park in St. Clair. Memorials may be made to Tiffany for Jeremy Burton’s Benefit Cruisin.

The family of Jeremy Edward Burton created this Life Tributes page to make it easy to share your memories.

Send flowers to the Burton family.