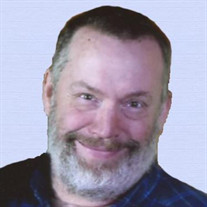 Jeffrey James Folk, known to all as Jeff, of St. Clair, MO departed this life at his home on September 9, 2021, having reached the age of fifty-four years, four months and three days. Jeff was born in Jefferson City, MO on May 6, 1967, son of James Louis Folk and Louise Meta Folk nee Bockhorst. On October 7, 1995 he was united in marriage to Diana Lynne Gildehaus and two daughters came to bless this union. Jeff is survived by his wife, Diana Folk of St. Clair, MO; by his mother, Louise Folk of Washington, MO; by his step-mother, Janet Folk of Springfield, MO; by his daughters, Elizabeth Folk and Hannah Folk, both of St. Clair; by his mother-in-law, Mary Gildehaus of Cedar Hill, MO; by other relatives and many friends. Jeff was preceded in death by his father, James Folk; and by his father-in-law, Alvin Gildehaus. Jeff was a Christian and active member of Bethel Baptist Church in Lonedell, MO. He especially enjoyed his men’s bible study at the church. After graduation from high school, he attended the University of Missouri, graduating in 1989 with a Bachelor’s degree in Photo Journalism. He then went on to attend Ranken Technical School in St. Louis, MO, graduating at the top of his class in Auto Mechanics. During his working career he was employed as an auto technician at Schicker Chrysler, formerly Barreth Chrysler, in Washington, MO for about twenty years. Jeff had a variety of interests throughout his life including his passion for photography, collecting Coleman lanterns, as well as other antiques, and going camping. He also loved owning and working on old cars from the 1960’s and 1970’s. Jeff was also quite the history buff and enjoyed listening to oldies but goodies music from the 1950’s. What meant most to him was time spent with family. The love they shared and the many precious memories they created will be cherished by them all forever. A kind and loving husband, father, son, step-son, son-in-law and treasured friend, he will be sadly missed and lovingly remembered by all who knew and loved him. Funeral services were held at 12:00 PM Tuesday, September 14, 2021 at Russell Colonial Funeral Home in St. Clair, MO with Rev. Ben Kingston officiating. Interment was in Bethel Cemetery in Lonedell, MO. Memorials may be made to Bethel Baptist Church in Lonedell, MO.

Jeffrey James Folk, known to all as Jeff, of St. Clair, MO departed this life at his home on September 9, 2021, having reached the age of fifty-four years, four months and three days. Jeff was born in Jefferson City, MO on May 6, 1967, son of... View Obituary & Service Information

The family of Jeffery James "Jeff" Folk created this Life Tributes page to make it easy to share your memories.

Jeffrey James Folk, known to all as Jeff, of St. Clair, MO departed...

Send flowers to the Folk family.