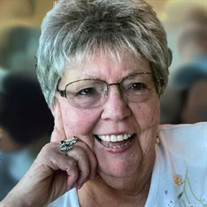 OBITUARY Janet Joanne Stokes of St. Clair, MO departed this life in Washington, MO on March 23, 2022, having reached the age of eighty-four years, three months and twenty-three days. Janet was born in St. Louis, MO on November 30, 1937, daughter of Dorsey Lee Stokes and Luetta Stokes nee Whitener. Janet is survived by two brothers, Don Stokes and wife, Sandy, of Salem, MO and Leonard Butts and wife, Robin, of Sullivan, MO; by one sister, Judy Richardson of St. Louis, MO; by her sister-in-law, Judy Butts of St. Peters, MO; by her partner of six years, Joseph “Bud” Zieroff; by five nephews, Brian Butts, Kenny Butts, Kevin Butts, Kraig Butts and Clay Stokes; by eight nieces, Lynn Bockover, Kelly Clark, Ashlyn Cunningham (god-daughter), Jennifer Glaser, Kate Huggins, Kerry Murry, Kriste Noonan and Michelle Panke; by her god-children, Cora and Sal Gallo and Addie Cunningham; by eighteen great-nephews, eleven great-nieces, cousins and many friends. Janet was preceded in death by her parents, Dorsey and Luetta Stokes; by two brothers, William “Ken” Butts and Leo Butts; by one sister, Maxine Neal; by one brother-in-law, George Richardson; and by one sister-in-law, Betty Ann Butts. Janet was a Christian and member of Holy Trinity Lutheran Church in St. Clair, MO, where she had previously served as Bible School Teacher. She was also a member of the Peacemaker Quilting Club and Garden Club. During her working career she was an operator for Southwestern Bell Telephone Company in St. Louis, MO for forty years, served as church secretary with her friend, Sandy, for eight years at Holy Trinity Lutheran Church and as an office manager of Jim Ealer in St. Clair. She had a variety of interests throughout her life including painting, quilting, gardening and working on crafts. Janet loved her dogs, even considering them as her children, and loved to socialize and laugh with both friends, and strangers, alike. Although she had no children of her own, she loved her nieces and nephews as if they were her own. The love they shared and many precious memories they created will forever be cherished by them all. A kind and loving sister, sister-in-law, aunt, great and great-great-aunt, cousin and treasured friend, she will be sadly missed and lovingly remembered by all who knew and loved her. Memorial services were held at 10:00 AM Thursday, March 31, 2022 at Russell Colonial Funeral Home in St. Clair, MO with Rev. David Vaughn officiating. A private interment will take place at a later date at Holy Trinity Lutheran Church Columbarium. Memorials may be made to HALO For Animals at P.O. Box 735, Sullivan, MO, 63080.

The family of Janet Joanne Stokes created this Life Tributes page to make it easy to share your memories.

Send flowers to the Stokes family.