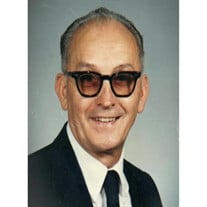 Hugh Orono Wideman of St. Clair, MO departed this life in St. Clair on September 17, 2021, having reached the age of ninety-nine years, nine months and twelve days. Hugh was born in St. Clair on December 5, 1921, son of Hugh Andrew Wideman and Maude Wideman nee Adams. On March 16, 1946 he was united in marriage to Beulah Mae Gaugh and two children came to bless this union. Hugh is survived by his son, Mike Wideman and wife, Linda, of Washington, MO; by his daughter, Marilyn Wideman and husband, Mallard Casteel, of Skokie, IL; by three grandchildren, Heather Burris and husband, David, of Barnhart, MO, Jennifer Castanedo and husband, Jeremy, of Liberty, MO and Devin Wideman and husband, Zac Togami, of Chicago, IL; by three great-grandchildren, Mason & Elliot Burris and Blake Castanedo; by his brother-in-law, Melvin Gaugh and wife, Betty, of Union, MO; by his sister-in-law, Jo Helen Gaugh of Kirkwood, MO; by nieces, nephews, great and great-great-nieces and nephews, cousins, other relatives and many friends. Hugh was preceded in death by his parents, Hugh and Maude Wideman; by his wife, Beulah Wideman; and by his sisters, Orpha Sibole and Edna Johnson. Hugh was a Christian and member of First Baptist Church in St. Clair, MO. He was active in the church and has been an ordained Deacon since January of 1957. He was proud to have served his country in the United States Army during World War II, entering on October 18, 1939 and receiving his honorable discharge on October 23, 1945, after have attaining the rank of SSGT. As a young man he worked for the St. Clair Chronicle for over twenty years. Hugh then went on to be employed at Pacer Industries, which later became Echlin Engine Systems in Washington, MO, retiring as a Quality Assurance Engineer. He was an avid reader and loved to study the Bible. In his younger years he also enjoyed working with flowers in his garden. What meant most to him was time spent with his family. The love they shared and many precious memories they created will forever be cherished by them all. A kind and loving, father, father-in-law, grandfather, great-grandfather, brother-in-law, uncle, great and great-great-uncle, cousin and treasured friend, he will be sadly missed and lovingly remembered by all who knew and loved him. Funeral services were held at 2:00 PM Sunday, September 26, 2021 at First Baptist Church in St. Clair, MO with Rev. Michael Kinion officiating. Interment with full military honors was in Midlawn Memorial Gardens in Union, MO. Memorials may be made to First Baptist Church in St. Clair, MO or to the American Heart Association.

The family of Hugo Orono Wideman created this Life Tributes page to make it easy to share your memories.

Send flowers to the Wideman family.