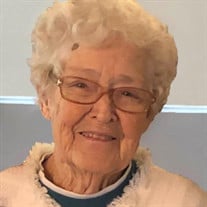 OBITUARY Hazel Mae Kommer of St. Clair, MO departed this life in St. Clair on February 24, 2022, having reached the age of eighty-nine years, five months and ten days. Hazel was born in Sullivan, MO on September 14, 1932, daughter of Grover Cleveland Wideman and Alletia may Wideman nee Adams. On March 4, 1950 she was united in marriage to William Vest, known to all as Bud, and two children came to bless this union. On August 27, 1977 she was united in marriage to Selden Kommer. Hazel is survived by her son, Bill Vest and wife, Connie, of Union, MO; by her daughter, Wanda Thurmond of St. Clair, MO; by one brother, Leroy Wideman and wife, Anna, of Sullivan, MO; by two grandchildren, Dana Jet and husband, Steve, of St. Charles, MO and Wendy Miller and husband, Dan, of Beaufort, MO; by two great-grandchildren, Josh Hinson and girlfriend, Meaghan Villhard, of Union, MO and Tyler Hinson of St. Clair; by four additional great-grandchildren, nieces, nephews, great, great-great and great-great-great-nieces and nephews, cousins and many friends. Hazel was preceded in death by her parents, Grover and Alletia Wideman; by her husbands, Bud Vest and Selden Kommer; by her son-in-law, David Thurmond, known to all as Gus; by one granddaughter, Shelley Hinson; by three brothers, Ralph Wideman, Bob Wideman and Marvin Wideman; and by her sisters, Silvia Bender, Goldie Brewer and Gladys Kopp. Hazel was a Christian and had been attending St. Clair Church of Christ in St. Clair, MO. During her working career she was employed at Brown Shoe Company in Union, MO for over twenty-five years. She had a variety of interests throughout her life including making baskets and travelling, especially to Branson, MO and Tunica, MS. Her children and grandchildren were her pride and joy and spending time with them brought her great joy. The love they shared and many precious memories they created will forever be cherished by them all. A kind and loving mother, mother-in-law, grandmother, great-grandmother, sister, sister-in-law, aunt, great, great-great and great-great-great-aunt, cousin and treasured friend, she will be sadly missed and lovingly remembered by all who knew and loved her. Funeral services were held at 12:00 PM Wednesday, March 2, 2022 at Russell Colonial Funeral Home in St. Clair, MO with Rev. Dick Hinson officiating. Interment was in New Chapel Hill Cemetery in Sulllivan, MO. Memorials may be made to Crabapple Village Activity Department in St. Clair, MO.

The family of Hazel Mae Kommer nee Wideman created this Life Tributes page to make it easy to share your memories.