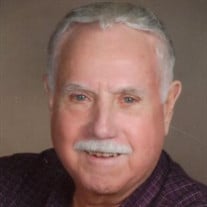 Francis Sylvester Overschmidt of Union, MO departed this life in Washington, MO on September 11, 2021, having reached the age of seventy-eight years, seven months and ten days. Francis was born in Villa Ridge, MO on February 1, 1943, son of Elmer David Overschmidt and Viola Leona Overschmidt nee Kindel. On June 5, 1965 he was united in marriage to Dianne Marie Zumwalt and three children came to bless this union. Francis is survived by his wife, Dianne Overschmidt of Union, MO; by his son, Charles Overschmidt and wife, Brenda, of Union; by his daughters, Lisa Anderson and husband, Bill, of Cary, IL and Kimberly Schroeder and fiancé, John Braun, of Union; by two sisters, Jerrine Lindemann and husband, Joe, of St. Clair, MO and Leona Collins of Union; by nine grandchildren, by brothers and sisters-in-law, nieces, nephews, great and great-great-nieces and nephews, cousins, other relatives and many friends. Francis was preceded in death by his parents, Elmer and Viola Overschmidt; and by his sister, Linda Rohrer. Francis was a Christian of the Catholic faith, a past member of St. Clare Catholic Church in St. Clair, MO and a present member of Immaculate Conception Catholic Church in Union, MO. He was proud to have served his country in the Missouri Army National Guard, entering on January 31, 1963 and receiving his honorable discharge on January 6, 1969. Francis owned and operated Elmer’s Tavern in Union, MO for thirty-five years. In 1988 he was elected Franklin County Commissioner and served until 1991. In 1991 he was elected to the MO State House of Representatives and served his district until 2000. Francis was a member of Knights of Columbus Council 4667 in St. Clair, MO, Moose Lodge 1745 in Union, MO and American Legion Post 297 in Union. He was also a member of the American Society of Military Insignia Collectors and enjoyed travelling to their conventions. On his family farm he raised beef cattle, corn and soybeans. What meant most to him was time spent with family. The love they shared and many precious memories they created will be cherished by them all forever. A kind and loving husband, father, father-in-law, grandfather, brother, brother-in-law, uncle, great and great-great-uncle, cousin and treasured friend, he will be sadly missed and lovingly remembered by all who knew and loved him. Funeral mass was held at 11:00 AM Friday, September 17, 2021 at St. Clare Catholic Church in St. Clair, MO with Father Eric Kunz officiating. Interment was in St. Clare Catholic Cemetery in St. Clair. Memorials may be made to Immaculate Conception Catholic School in Union, MO or masses.

The family of Francis Sylvester Overschmidt created this Life Tributes page to make it easy to share your memories.

Send flowers to the Overschmidt family.