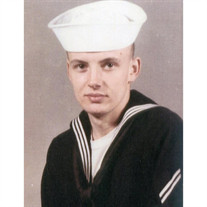 David Ware of St. James, MO, formerly of St. Clair, MO departed this life in St. James on August 7, 2021, having reached the age of seventy-three years, six months and twenty-five days. David was born in Washington, MO on January 12, 1948, son of Lawrence Oscar Ward and Naomi Allie Ware nee Nappier. On September 2, 1967 he was united in marriage to Margaret Jean Bridgers. David is survived by his wife, Margaret Ware of St. Clair, MO; by one brother, Jeffrey Ware and wife, Debbie, of New Baden, IL; by his sisters, Pauline Scheer of St. Clair and Hope Thoele and husband, Ed, of Shreveport, LA; by his sister-in-law, Carolyn Langley of Portsmouth, VA; by his brother-in-law, Richard Bridgers of Portsmouth, VA; by his aunt, Thelma Vaughn of Sullivan, MO; by his best friend, Jeremy Aleshire of Grubville, MO; by nieces, nephews, great and great-great-nieces and nephews, cousins and many friends. David was preceded in death by his parents, Lawrence and Naomi Ware; and by two brothers, Paul Ware and Donald A. Nappier. David was a Christian, having been raised in the Catholic faith and believing in the Lord as his Savior. He was proud to have served his country in the United States Navy during the Vietnam War, entering on January 22, 1965 and receiving his honorable discharge on January 10, 1969. During his working career he was employed as a heavy equipment mechanic at Bobcat of St. Louis in Valley Park, MO. He was a proud member of American Legion Post 347 and VFW Post 2482, both in St. Clair, MO. David enjoyed tinkering with engines, riding and fixing motorcycles and especially liked to ride his Can-Am. He also loved to go boating and camping when he had his clubhouse on the river. The many precious memories created with his family will forever be cherished by them all. A kind and loving husband, brother, brother-in-law, nephew, uncle, great and great-great-uncle, cousin and treasured friend, he will be sadly missed and lovingly remembered by all who knew and loved him. A committal service will take place at a later date at Anaconda Community Cemetery in St. Clair, MO on Saturday, August 28, 2021 at 11:00 AM. Memorials may be made to the American Diabetes Association. The family of David Ware was served by Russell Colonial Funeral Home in St. Clair, MO.

The family of David Ware created this Life Tributes page to make it easy to share your memories.

Send flowers to the Ware family.