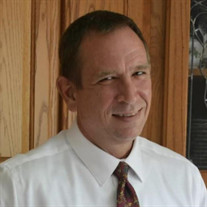 Curtis Charles Weilandich of Bourbon, MO departed this life in Fenton, MO on November 7, 2021, having reached the age of fifty-seven years, seven months and two days. Curtis was born in St. Louis, MO on April 5, 1964, son of Charles Ernest Weilandich and Ellen Marie Weilandich nee Luecking. On January 31, 1987 he was united in marriage to Virginia Le`Ann Wilson, known to all as Le`Ann, and two children came to bless this union. Curtis is survived by his wife, Le`Ann Weilandich of Bourbon, MO; by his children, Crystal Lynn Weilandich of Pacific, MO and Christopher Ryan Weilandich, know to all as Ryan, and wife, Rachel, of O’Fallon, MO; by four sisters, Teri O’Brien and husband, Tony, of St. Clair, MO, Leigh Costello and husband, Jim, of Luebbering, MO, Alison Byerley and husband, Bob, of Lonedell, MO and Jeanne Welker and husband, Harry, of Broken Arrow, OK; by his parents-in-law, Keith and Ann Wilson of St. Clair; by his grandchildren, Angelina, Jonathan, Layla and Aiva; by brothers and sisters-in-law, nieces, nephews, great-nieces and nephews, cousins and many friends. Curtis was preceded in death by his parents, Charles and Ellen Weilandich; and by one sister, Laura Weilandich. Curtis was a Christian and was currently attending Grace City Christian Church in Bourbon, MO, where he was very active in church functions and was recently baptized. During his working career he owned and operated AFI Automotive in St. Clair, MO for about twenty years. Curtis loved working on cars and auto racing. He also enjoyed building and creating things. His children and grandchildren were his pride and joy and held a very special place in his heart. The love they shared and many precious memories they created will be cherished by them all forever. A kind and loving husband, father, father-in-law, grandfather, son-in-law, brother, brother-in-law, uncle, great-uncle, cousin and treasured friend, he will be sadly missed and lovingly remembered by all who knew and loved him. Funeral services were held at 10:00 AM Saturday, November 20, 2021 at Russell Colonial Funeral Home in St. Clair, MO with Rev. Billy Brison officiating. Interment was in St. Francis of Assisi Catholic Cemetery in Luebbering, MO. Memorials may be made to Mission Gate Ministry for Hannah’s Ranch.

The family of Curtis Charles Weilandich created this Life Tributes page to make it easy to share your memories.

Curtis Charles Weilandich of Bourbon, MO departed this life in...

Send flowers to the Weilandich family.