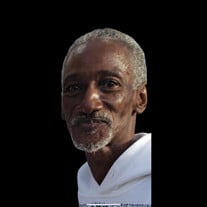 Charles McDaniel, known to all as Charlie, of St. Louis, MO departed this life in St. Louis on October 2, 2021 having reached the age of sixty-three years, one month and sixteen days. Charlie was born in St. Clair, MO on August 16, 1958, son of Sam McDaniel and Mattie McDaniel nee Graham. As a young man he was united in marriage to Janet Dowell and in this union was blessed to have two children. Charlie is survived by his son, Garrett McDaniel of St. Louis, MO: by his daughter, Caitlin McDaniel of Florissant, MO; by four brothers, Clifford McDaniel and wife, Peggy, of St. Clair, MO, Robert McDaniel of Ballwin, MO, Clarence McDaniel of St. Louis and Sammie McDaniel and wife, Renne, of Robertsville, MO; by three sisters, JoAnn Moore of Robertsville, Diane Beasley of St. Louis and Loretta McDaniel of Jennings, MO; by seven grandchildren, Donovan McDaniel, Zakiya Williams, Jayden Williams, Vanessa McDaniel, Xavier McDaniel, Jeremiah Reid and Zion McDaniel; by nieces, nephews, great and great-great-nieces and nephews, cousins, other relatives and many friends. Charlie was preceded in death by his parents, Sam and Mattie McDaniel; by two brothers, Larry McDaniel and Walter McDaniel; and by three sisters, Alice Windom, LaVerne Johnson and Brenda Peal. Charlie was a Christian, having been baptized at Rose Hill Missionary Baptist Church as a young man, and believing in the Lord as his Savior. During his working career he worked at various companies such as North Star Ice Cream in St. Louis, MO and Aurora Technologies in Pacific, MO but worked as a commercial landscaper mostly. He liked to dress well, play pool and listen to music. He also enjoyed doing landscaping. His children and grandchildren were his pride and joy. They held a very special place in his heart, as he did in theirs. The love they shared and many precious memories they created will forever be cherished by them all. A kind and loving father, grandfather, brother, brother-in-law, uncle, great and great-great-uncle, cousin and treasured friend, he will be sadly missed and lovingly remembered by all who knew and loved him. Funeral services were held at 1:00 PM Saturday, October 9, 2021 at Russell Colonial Funeral Home in St. Clair, MO with Pastor John Moore officiating. A private committal will take place at a later date at Rose Hill Cemetery in Villa Ridge, MO. Memorials may be made to the family.

Charles McDaniel, known to all as Charlie, of St. Louis, MO departed this life in St. Louis on October 2, 2021 having reached the age of sixty-three years, one month and sixteen days. Charlie was born in St. Clair, MO on August 16, 1958, son... View Obituary & Service Information

The family of Charles "Charlie" McDaniel created this Life Tributes page to make it easy to share your memories.

Charles McDaniel, known to all as Charlie, of St. Louis, MO departed...

Send flowers to the McDaniel family.