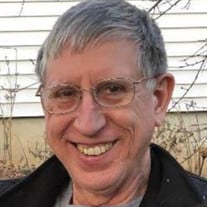 Not sure what to send?

Charles Michael Cikovic, St. Clair, Missouri, passed away peacefully at home on Monday, May 2, 2022. Charlie was born to Frank and Marion (nee Fasnacht) Cikovic on June 13, 1954 in Lebanon, Pennsylvania. Charlie worked on the family dairy farm until graduating from high school. Continuing his education in theology and further study with a Master of Science degree in business, Charlie’s sense of adventure took him across the globe to places including Spain, Italy and Mexico before returning home to be with his family. In 1998 while working in St. Louis, Charlie met his angel and love of his life doing what they both enjoyed…dancing. Charlie was united in marriage to Carlyn Brueggemann Bailey on July 14, 2001 and accepted her three daughters as his own. Carlyn and Charlie spent their time traveling, concert going, trying new restaurants and always opening a bottle of wine. He could never turn down a Tastykake, shoo fly pie or sweet Lebanon bologna that took him back to his Pennsylvania roots. An avid sports fan, Charlie did not miss a Tampa Bay Lightning game unless he was watching his grandkids’ events. He was notorious for providing dinners, tickets for concerts, games and flights just for his family to enjoy and be together. Charlie, a devout Catholic, was always the first person to offer a helping hand. He spent much time caring for his friends and was an active fourth degree member of the Knights of Columbus Union, Missouri Council 1576. Charlie was abundantly loved by his family. He is survived by his wife, Carlyn Cikovic; daughters, Cozy Bailey and wife, Cheryl, of St. Clair, Kasi Meyer and husband, Tim, of New Haven, Amy Robinette and husband, John, of St. Clair; his mother, Marion Cikovic, of Sarasota, Florida; siblings Cynthia Drew and husband, Tom, of Ellenton, Florida, Susan Anthofer and husband, Scott, of Sarasota, Florida, David Cikovic and wife, Deb, of Knoxville, Tennessee, Dennis Cikovic and wife, Leah, of Sarasota, Florida, Richard Cikovic of Marietta, Georgia, Cathy Cikovic Parkerson of Sarasota, Florida; grandchildren, nieces and nephews, and many friends. He was preceded in death by his father, Frank Cikovic. A memorial mass will be held at St. Clare Catholic Church on Saturday, May 21 at 9:00 a.m. Memorials can be made to Knights of Columbus Union, Missouri Council 1576.

The family of Charles Michael Cikovic created this Life Tributes page to make it easy to share your memories.