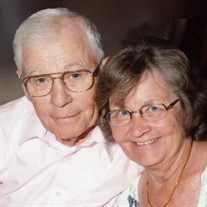 OBITUARY Charles Wayne Braswell, known to all as Wayne, of St. Clair, MO departed this life in Washington, MO on April 30, 2022, having reached the age of eighty-six years, one month and eleven days. Wayne was born in Decatur, AL on March 19, 1936, son of Chester Braswell and Opal Braswell nee Thompson. As a young man he was blessed to have two sons. On October 31, 1987 he was united in marriage to Audrey Branham and their families were joined as one. Wayne is survived by his step-daughters, Lisa Hilse and boyfriend, Jay Perkins, of St. Clair, MO and Pam Braswell and husband, Doug, of Hillsboro, MO; by two brothers, David L. Braswell and wife, Iva, of Moody, AL and Gary P. Braswell and wife, Linda, of Elkmont, AL; by his sister, Carolyn Cornelius of Decatur, AL; by his brother-in-law, Derek Branham and wife, Bonnie, of Arnold, MO; by his sister-in-law, Narcie Braswell of Festus, MO; by his grandchildren, Vanessa Seaver and husband, Nick, of Greenville, SC, Melea Roark of Billings, MT, Valena Bragg and husband, Jason, of Decatur, IL, Michael “David” Braswell of Festus, MO, Gregory Braswell and wife, Christin, of Waterloo, IL, Shawn Braswell of Hillsboro, MO and Amanda Matson and husband, Derrick, of Winfield, MO; by many great-grandchildren, nieces, nephews, great-nieces and nephews, cousins and many friends. Wayne was preceded in death by his parents, Chester and Opal Braswell; by his wife, Audrey Braswell; by his sons, Terry Wayne Braswell and Jerry Leon Braswell; and by his brother, Billy Braswell. Wayne was a Christian and member of First Baptist Church in St. Clair, MO. During his working career he was employed at Liberty Supermarket in St. Louis, MO. Upon their opening Wayne was employed at the IGA Food Store in St. Clair, MO as a night manager, retiring after thirty years of service to the company. He was a member of NHRA, AHRA, IHRA and past member of the Route 66 Car Club. Wayne loved racing at the track and going to car shows. He enjoyed watching St. Louis Cardinal baseball games. He also enjoyed watching college basketball games, especially March Madness. What meant most to him was his time spent with family. The many memories they created will be treasured by them all forever. A kind and loving step-father, grandfather, great-grandfather, brother, brother-in-law, uncle, great-uncle, cousin and treasured friend, he will be sadly missed and lovingly remembered by all who knew and loved him. Funeral services were held at 1:00 PM Friday, May 6, 2022 at Russell Colonial Funeral Home in St. Clair, MO with Rev. Michael Kinion officiating. Entombment was in Crestview Memorial Park Haven of Rest Mausoleum in St. Clair, MO. Memorials may be made to the American Diabetes Association.

OBITUARY Charles Wayne Braswell, known to all as Wayne, of St. Clair, MO departed this life in Washington, MO on April 30, 2022, having reached the age of eighty-six years, one month and eleven days. Wayne was born in Decatur, AL on March... View Obituary & Service Information

The family of Charles "Wayne" Braswell created this Life Tributes page to make it easy to share your memories.

Charles Wayne Braswell, known to all as Wayne, of...

Send flowers to the Braswell family.