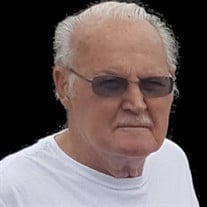 Calvin Harry Sansoucie, known to many as Cal, of Union, MO, departed this life in Union on August 24, 2021, having reached the age of eighty-eight years, seven months and twenty-one days. Calvin was born in Blackwell, MO, on January 3, 1933, son of Charles Francis Sansoucie and Bridget Sansoucie nee Kerr. As a young man, he was united in marriage and blessed to have three children. In later years, he was united in marriage and blessed to have three more children. About eleven years ago, he began sharing his life with Elsie Buchholz. Calvin is survived by his companion, Elsie Buchholz of Union, MO; by five children, Mark Sansoucie of St. Clair, MO, Jonathan Sansoucie and wife, Beth, of St. Charles, MO, Michael Sansoucie and wife, Brenda, Allen Sansoucie and Carol Wideman, all of DeSoto, MO; by his daughter-in-law, Tricia Sansoucie of St. Clair; by two sisters, Berniece Holstein of Ft. Meyers Beach, FL and Martha Jane Sounders of Cadet, MO; by eleven grandchildren, eight great-grandchildren, brothers and sisters-in-law, nieces, nephews, great and great-great-nieces and nephews, cousins and many friends. Calvin was preceded in death by his parents, Charles and Bridget Sansoucie; by one son, Steven Sansoucie; by one granddaughter, Rachel Sansoucie; by one son-in-law, Don Wideman; by four brothers and by six sisters. Calvin was a Christian, believing in the Lord as his Savior. He was proud to have served his country in the United States Army during the Korean War, entering on March 26, 1953 and receiving his honorable discharge on February 11, 1955. Calvin was a member of VFW Post 2482 and a past member of American Legion Post 347, both in St. Clair, MO. During his working career, he was employed by Daimler-Chrysler Corporation and was working as an air conditioning repairman, retiring after twenty years of service to the company. He was a member and retiree of United Auto Workers Local 110 and 136 in St. Louis, MO. He loved to play music, primarily the drums, but he also played bass guitar and piano. Another pastime of his was gambling at the casino. What meant most to him was time spent with family. His children and grandchildren held a special place in his heart, as he did in theirs. A kind and loving companion, father, father-in-law, grandfather, great-grandfather, brother, brother-in-law, uncle, great and great-great-uncle, cousin and treasured friend, he will be sadly missed and lovingly remembered by all who knew and loved him. Funeral services were held at 10:00 AM Monday, August 30, 2021 at Russell Colonial Funeral Home in St. Clair, MO with Rev. Fern Nye officiating. Interment with full military honors was in Crestview Memorial Park in St. Clair. Memorials may be made to VFW Post 2482 in St. Clair.

Calvin Harry Sansoucie, known to many as Cal, of Union, MO, departed this life in Union on August 24, 2021, having reached the age of eighty-eight years, seven months and twenty-one days. Calvin was born in Blackwell, MO, on January 3, 1933,... View Obituary & Service Information

The family of Calvin Harry Sansoucie created this Life Tributes page to make it easy to share your memories.

Calvin Harry Sansoucie, known to many as Cal, of Union, MO, departed...

Send flowers to the Sansoucie family.