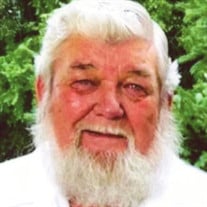 OBITUARY Billy Dan Manson of St. Clair, MO departed this life in Washington, MO on January 15, 2022, having reached the age of seventy-nine years, six months and three days. Billy was born in Joshua, TX on July 2, 1942, son of William Carlos Manson, known to all as Bill, and Emma Mae Manson nee Youngblood. On February 6, 1962 he was united in marriage to Virginia Pauline Black and four children came to bless this union. Billy is survived by his wife, Virginia Manson of St. Clair, MO; by his children, Sandra Uloth and husband, Mark, of Walnut Springs, TX, Billy T. Manson, known to all as Corky, of Union, MO, Gina Sanders and husband, Roger, of St. Clair, MO and Bruce Manson of Gerald, MO; by his sisters, Mary Katherine Godwin of Burleson, TX, Brenda Bowman and husband, Chester, of Joshua, TX and Sheila Applegate and husband, Lonnie, of Joshua, TX; by ten grandchildren, twelve great-grandchildren, nieces, nephews, great and great-great-nieces and nephews, cousins and many friends. Billy was preceded in death by his parents, Bill and Emma Manson; by his brother, Johnny Manson; and by his grandson, Tyler Manson. Billy was a Christian, having been raised in the Baptist faith and believing in the Lord as his Savior. During his working career he owned and operated Manson Construction Company, as well as previously working as a concrete finisher for various other companies. He was a very active man, whether tinkering with or building stuff, going fishing, hunting or camping. He also loved to eat and participate in the Chili Cookoff, where he was known as Armadillo Manson. Billy also loved to play 42 Domino Game. What meant most to him was time spent with family. The love they shared and the many precious memories they created will be cherished by them all forever. A kind and loving husband, father, father-in-law, grandfather, great-grandfather, brother, brother-in-law, uncle, great and great-great-uncle, cousin and treasured friend, he will be sadly missed and lovingly remembered by all who knew and loved him. Funeral services were held at 12:00 PM Friday, January 21, 2022 at Russell Colonial Funeral Home in St. Clair, MO with Rev. Elvis Lee officiating. Interment was in Crestview Memorial Park in St. Clair. Memorials may be made to the family.

The family of Billy Dan Manson created this Life Tributes page to make it easy to share your memories.

Send flowers to the Manson family.