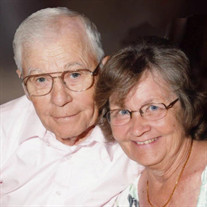 OBITUARY Audrey Braswell nee Branham of St. Clair, MO departed this life at her home, surrounded by the love of her family, on April 30, 2022, having reached the age of seventy-four years, three months and ten days. Audrey was born in Pikeville, KY on January 20, 1948, daughter of Sylvan Branham and Lillian Branham nee Adkins. As a young woman she was blessed to have two daughters. On October 31, 1987 she was united in marriage to Charles Wayne Braswell, known to all as Wayne, and their families were joined as one. Audrey was survived by her husband, Wayne Braswell; and is survived by her daughters, Lisa Hilse and boyfriend, Jay Perkins, of St. Clair, MO and Pam Braswell and husband, Doug, of Hillsboro, MO; by one brother, Derek Branham and wife, Bonnie, of Arnold, MO; by two grandchildren, Shawn Braswell of Hillsboro, MO and Amanda Matson and husband, Derrick, of Winfield, MO; by four great-grandchildren, Benjamin Braswell, Lucas Braswell, Madyson Braswell and Cameron Matson; by brothers and sisters-in-law, nieces, nephews, great-nieces and nephews, cousins and many friends. Audrey was preceded in death by her parents, Sylvan and Lillian Branham; and by one brother, Gary Branham. Audrey was a Christian and member of First Baptist Church in St. Clair, MO. During her working career she was employed at IGA food store in St. Clair, MO for about twenty years in the bakery, making cakes and donuts. The grandchildren loved it when she would bring home donuts to them. She then went on to employment at R&R Ace Hardware in St. Clair, retiring after five years of service. Audrey had a variety of interests throughout her life. She loved to go bowling, go to the flea market and antiquing. Audrey also loved going to the casino, where she was quite lucky, and going to watch Wayne race drag cars. What meant most to her was time spent with family. The love they shared and many precious memories they created will forever by cherished by them all. A kind and loving mother, mother-in-law, grandmother, great-grandmother, sister, sister-in-law, aunt, great-aunt, cousin and treasured friend, she will be sadly missed and lovingly remembered by all who knew and loved her. Funeral services were held at 1:00 PM on Friday, May 6, 2022 at Russell Colonial Funeral Home in St. Clair, MO with Rev. Michael Kinion officiating. Entombment was in Crestview Memorial Park Haven of Rest Mausoleum. Memorials may be made to the American Diabetes Association.

OBITUARY Audrey Braswell nee Branham of St. Clair, MO departed this life at her home, surrounded by the love of her family, on April 30, 2022, having reached the age of seventy-four years, three months and ten days. Audrey was born in Pikeville,... View Obituary & Service Information

The family of Audrey Braswell nee Branham created this Life Tributes page to make it easy to share your memories.