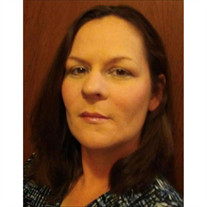 Amy Sue Banderman of St. Clair, MO, departed this life in St. Clair on August 3, 2021, having reached the age of forty-two years, eight months and two days. Amy was born in Washington, MO, on December 1, 1978, daughter of Russell Herman Banderman, Sr. and Joyce Lorraine Banderman nee Crum, known to all as Joy. As a young woman she was blessed to have one son. Amy is survived by her son, Lance Banderman of Union, MO; by her mother, Joy Ragsdale and husband, Keith, of St. Clair, MO; by one brother, Bradley Banderman, known to all as Brad, and wife, Shannon, of St. Clair; by her sister, Michelle Huggins and husband, Eric, of Stuarts Draft, VA; by Lance’s father, Philip Muir of Springfield, MO; by aunts, uncles, nieces, nephews, cousins and many friends. Amy was preceded in death by her father, Russell H. Banderman, Sr., and by one brother, Russell H. Banderman, Jr., known to all as Rusty. Amy was a Christian of the Baptist faith, believing in and loving the Lord. She was proud to have served her country in the United States Army, entering on January 27, 1998 and receiving her honorable discharge on March 23, 2001, having served in the military police. She had received a Bachelors degree in Criminal Justice from Missouri Baptist College and a Bachelors degree in Radiology from Brown University. She has been employed at the Franklin County Sheriffs Department in Union, MO, as a guard at the facility jail. Amy previously worked at the state prison in Pacific, MO as a guard and worked security at the Federal Reserve Bank in St. Louis, MO. She was later employed at Missouri Baptist Hospital in Sullivan, MO and St. Louis, MO, as a radiology technician. She also worked for the United Postal Service as a letter carrier in Washington, MO, and was currently working as a supervisor at the O’Fallon, MO Post Office. She loved her work, loved helping people however she could and had a passion for community service. Amy enjoyed going to the beach, cross stitching and knitting. Her son was her pride and joy and held a very special place in her heart. The love they shared and many precious memories they created will forever live on his heart. A kind and loving mother, daughter, step-daughter, sister, sister-in-law, niece, aunt, cousin and treasured friend, she will be sadly missed and lovingly remembered by all who knew and loved her. Funeral services were held at 2:00 PM Sunday, August 8, 2021, at Russell Colonial Funeral Home in St. Clair, MO, with Brother Brad Banderman officiating. Private interment was in Crestview Memorial Park, St. Clair, MO. Memorials may be made to Lance Banderman.

The family of Amy Sue Banderman created this Life Tributes page to make it easy to share your memories.

Send flowers to the Banderman family.